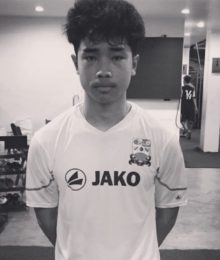 I originally took my son, Chin, to see Saul to get a professional assessment of his potential a few

years ago. He had been progressing at grass roots club level and wanted to take it further – but I

wanted to get a professional opinion before committing the time and money. Being a proud dad is

often not the best position to make these sorts of decisions!

Saul was an outstanding find. Honest, direct and plain speaking, we soon knew exactly where we

were and what was achievable. The results were instantaneous, mainly due to Saul’s unique

coaching style, philosophy and infectious enthusiasm that brings out the best in any player.

Saul’s advice was spot on, and even though it took a lot of hard work Chin soon found himself

playing for a top grass roots club, collecting regional trophies and playing at invitation only national

with a direct pathway to a first team contract – if he works hard enough!

Saul still manages to surprise us though! Chin was born in Thailand and holds dual citizenship. On

tournament. It is evident that Saul’s professional experience and reputation can open doors across

Obviously, I cannot recommend Saul’s training programmes highly enough. I can honestly say that if

you follow his advice and work hard then dreams can be realised.