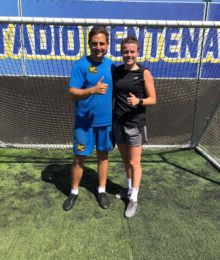 Hayley Ladd is a 25-year-old centre midfielder who previously has played for Arsenal, Kokkola Futis, Coventry City, Bristol City and Birmingham City. In June 2019, Ladd agreed to sign with Manchester United ahead of the team’s first season in the FA WSL. She has represented Wales 54 times throughout her career. During the 2019/2020 pre-pre-season, Hayley worked with Saul before heading up to Manchester. She said

“Yeah, it’s brilliant, definitely getting me going before pre-season. Worked on ball manipulation, lots of lateral movement and trying to move my body and turn opponents to get them facing forwards.”