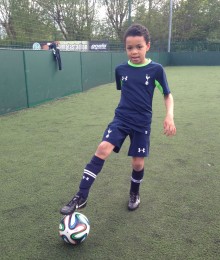 Saul identified Zach’s natural assets of speed and agility and Saul’s technical expertise was instrumental in unveiling an unexplored layer to Zach’s game. A Mix of drills and warm up exercises were key in enhancing his agility. Whilst sessions dedicated to shooting and volleying practice contributed to him becoming a well rounded player. Zach has come a long way in a short space of time since seeing Saul and this has led to him being signed for Tottenham Hotspur U9’s academy. I have been extremely impressed by the training Zach received from Saul and would highly recommend Saul to anyone.
Thanks  Cynthia (Zach’s Mother)
View more Success Stories »